Romney has commanding organizational lead in Iowa, but stretches the truth 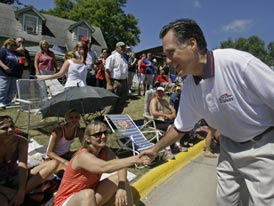 "Six months before the Iowa caucuses, Mitt Romney has taken a commanding organizational lead in this traditional kick-off state," reports Jonathan Martin of Politico.com. "John McCain's financial difficulties have forced him to dramatically scale back his Iowa campaign, and it's not clear whether former New York Mayor Rudy Giuliani or ex-Tennessee Sen. Fred Thompson will fully engage in the Hawkeye State caucuses. (Associated Press photo)

"That leaves Romney as the sole representative of the GOP top tier to commit to the traditional Ames Straw Poll and offer himself to voters for up close and personal inspections. The former Massachusetts governor has 20 full-time staffers, coordinators in most of the state's 99 counties, and a group of about 50 "super volunteers" that has already swept through the universe of likely caucus-goers with initial phone calls and have begun going door to door in key precincts. His effort got a big boost last week when McCain, down to just $2 million cash on hand, halved his Iowa staff to seven to save money."

Martin blames McCain's support of the failed immigration bill, and notes that Guiliani has made changes in his Iowa staff, but you have to wait until the second page of the story to see the reason we think Romney is ahead in Iowa: He's the only candidate who's run TV and radio ads. And they were good ads. (Read more) They were compelling. However, they stretched the truth, says the Annenberg Political Fact Check at the University of Pennsylvania, which said today that he "exaggerates his record and traffics in ambiguous language." We'd spell it "trafficks," but we put much stock in FactCheck, because it's run by Brooks Jackson, a former investigative and political reporter for The Wall Street Journal and CNN. To read his latest on Romney, go to http://www.factcheck.org/.
Written by Al Cross Posted at 7/09/2007 12:05:00 PM