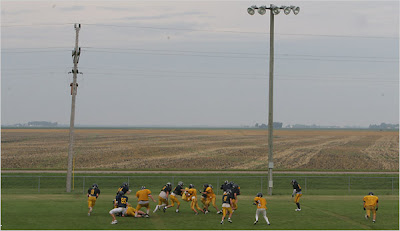 The empty, abandoned school is yet another sign of shrinking rural communities. Across Nebraska, these old buildings offer communities difficult choices as they weigh the risks against the rewards of finding new uses for these structures, reports Paul Hammel of the Omaha World-Herald.

Hammel writes that in the last nine years at least 27 Nebraska school districts have been forced to merge, and thus dozens of old schools lie empty. While some communities have decided the aging buildings aren't worth trouble, others seek to find new uses for them. Hammel recounts some of these renovation successes as well as the failure. In Avoca, Neb., two musicians transformed a school into a music studio, while in 1993 an old school in Holbrook became the Central Plains Technology and Business Development Center and is now occupied by six businesses.On the hand, there were failed attempts made by people in Nelson and Edgar to turn old schools into museums. In Venango, some locals want to turn the high school into youth home, but Hammel writes that after five years of lying vacant the school needs about $400,000 in repairs to satisfy safety codes. (Read more)

In a related story, The New York Times explores how merged high-school football teams are signs of changing times. Joe Spring reports from northwestern Minnesota and describes how Friday night football has changed, as nearby towns merge their high schools and their football teams. In Marshall County, where the towns of Stephen and Argyle have found football success as the Stephen/Argyle Central Storm, the average age is 40 and almost 20 percent are over 65. (Above, the team practices in a photo by Spring). The aging community means smaller classes at the high school, whose student body has dropped to 180 from 270 a decade ago. “Many places are turning back to frontier,” Tom Gillaspy, the state’s demographer, told Spring. (Read more)
Written by Al Cross Posted at 9/13/2007 02:25:00 PM