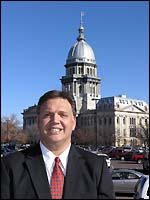 In 2005, Scott Reeder, left, the Springfield, Ill., bureau chief for Small Newspaper Group, won multiple awards for his investigation into teacher tenure in Illinois, called "The Hidden Costs of Tenure." This week, the newspaper chain published Reeder's latest investigative effort, which compares teacher discipline in Illinois and the rest of the country does it. This series is called "Hidden Violations," and it used data compiled from records requests in all 50 states. On the Web site that hosts the report, Reeder summarizes his key findings about Illinois' record disciplining teachers:
In Illinois, Small Newspaper Group owns The Daily Journal in Kankakee, The Dispatch in Moline, The Rock Island Argus and The Times of Ottawa and Streator.
Written by Tim Wiseman Posted at 10/19/2007 08:23:00 AM