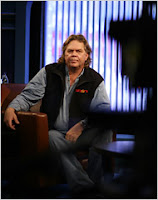 Last month we wrote about the possibility of Don Imus returning to television on an unlikely channel, RFD-TV. According to The New York Times, Imus will join the Omaha-based satellite channel that caters to rural audiences when he returns to the airwaves in December.

"Patrick Gottsch, a former satellite-dish installer from Nebraska who founded RFD-TV in 1988, said in an interview yesterday that he had reached agreement with Mr. Imus on a five-year contract to televise his program," Jacques Steinberg writes. "While Mr. Gottsch would not discuss any financial terms, someone else briefed directly on the deal said it could be worth up to $5 million a year — about what WABC-AM and its parent company, Citadel Broadcasting, are paying for the radio program."

A source close to Imus said he would be signing a contract in the next few days, Steinberg reports. RFD-TV will simulcast the radio show in the morning and then re-run the show in the evening on its high-definition channel. RFD-TV, which stands for Rural Free Delivery, is available in 30 million homes via satellite dish, but Gottsch (at left in Times photo by Tony Celicola) hopes Imus will help land a deal with a cable provider. (Read more)

Does this mean that rural areas will be subjected to racist and derogatory comments at a time when many of us are working as hard as we can to stop such discrimination?