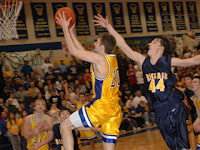 Watersmeet, Mich., fits every definition of rural. It has a population of fewer than 1,500, and it sits among the streams and lakes of the state's Upper Peninsula. The tiny town and its high school basketball team, the Nimrods, will be in the spotlight when the eight-part miniseries "Nimrod Nation" debuts Nov. 26 on the Sundance Channel. The film was screened this week in Madison, Wis., reports the Ironwood (Mich.) Daily Globe. Members of the basketball and cheerleading squad as well as the film's director, Brett Morgen, were on hand, reports Jason Juno.

The Watersmeet Township School — which has less than 100 students — had been featured in a 2004 ESPN commercial that said, ''Without sports, who would cheer for the Nimrods?'' Those ads brought national attention to the school and its basketball, and they sparked sales of about $80,000 worth of Nimrod gear, reported The New York Times in 2004. The ads also brought Morgen to the town to film the 2005-06 basketball season.

"More a portrait of a small American town than a conventional sports documentary, 'Nimrod Nation' sympathetically observes life and conversation in the local coffee shops, hunting lodges and locker rooms as the long, cold basketball season unfolds," according to the Sundance Channel Web site.