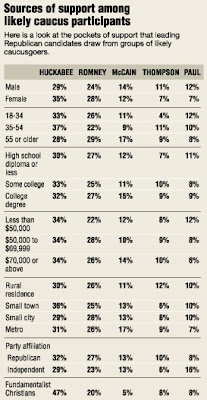 On the strength of rural and small-town voters, but also with support from metro areas, former Arkansas Gov. Mike Huckabee had a marginal lead in The Des Moines Register's final Iowa Poll before the Jan. 3 Republican presidential caucuses. (Register chart)

Huckabee had 32 percent of likely caucusgoers, to 26 percent for former Massachusetts Gov. Mitt Romney, 13 percent for Arizona Sen. John McCain and 9 percent each for former Sen. Fred Thompson and Rep. Ron Paul. The poll's margin of error was 3.5 percentage points, so Huckabee's lead was within the margin. The error margins for geographic subsamples were much greater, but the results do indicate the sources of each candidate's support. Small towns were Huckabee's main base; in them, he led Romney 36-25. Among rural residents, he led Romney 30-26; in metro areas, 31-26. The race was tightest in small cities: Huckabee 29, Romney 28.

The key to Huckabee's lead is "born-again or fundamentalist Christians," reports the Register's Jonathan Roos. Almost half of Republican caucusgoers fit that category, and among them, "Huckabee outpolls Romney, 47 percent to 20 percent. Romney has faced questions about his religious standing as a Mormon. Among those who think it's more important for the next president to be a social conservative than a fiscal conservative, Huckabee leads Romney 48 percent to 24 percent. "

There was no major trend during the Dec. 27-30 polling period, but some observers, such as the Register's David Yepsen, think Huckabee slipped badly today with a "goofy press conference ... in which he promised not to run attack ads against Mitt Romney while producing them and showing them to reporters anyway. " (Read more) Roos reports, "The poll shows there remains enough indecision among likely caucus participants to scramble both the race for first place between Huckabee and Romney, and the battle for third. Nearly one-half of caucusgoers say they could still be persuaded to support another candidate." (Read more)
Written by Al Cross Posted at 12/31/2007 11:40:00 PM