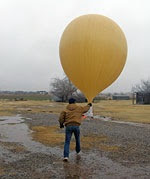 Many rural areas are still waiting for something many Americans take for granted: access to the Internet. Logistical and geographic obstacles have kept more than a third of rural Americans without Internet connections, and so the issue requires some creativity, such as the answer from Space Data Corp. which is drawing attention from Google. Space Data sends balloons carrying a "shoebox-size payload" of electronic gear 20 miles into the stratosphere, and from that height, they offer miles of wireless coverage below, reports The Wall Street Journal's Amol Sharma (who also took the photo).

The balloons don't float forever; after about day, they pop and the electronics — protected by Styrofoam — glide back to earth on a parachute. "This means Space Data must constantly send up new balloons," Sharma writes. "To do that, it hires mechanics employed at small airports across the South. It also hires farmers — particularly, dairy farmers." The farmers are paid $50 per launch, and the company offers $100 for every electronics unit recovered.

Currently, the Arizona-based company has at least 10 balloons aloft constantly, which provide wireless service for oil companies and truckers in the South. Some environmentalists have concerns about the shreds of latex that fall to earth after the balloon pop, but the company's chief executive, Jerry Knoblach, told Sharma the operation has been reviewed by a dozen federally agencies and found to have no environmental impact. In fact, he said, there might be a positive effect since balloons do the work of 40 cell phone towers. (Read more)
Written by Tim Wiseman Posted at 2/21/2008 09:44:00 AM