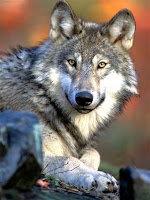 Last month, we mentioned the U.S. Fish and Wildlife Service was concerned about the impact of the gray wolves on elk herds in the Northern Rockies. As a result, the USFWS eased hunting rules to allow state wildlife agencies and livestock owners to kill the endangered gray wolves if they were affecting elk populations or killing pets or livestock. This week, the FWS removed the gray wolves from the endangered species list, thus making the wolves fair game for all hunters next fall in Idaho, Montana and Wyoming, reports Tami Abdollah of the Los Angeles Times. (FWS photo)

"Gray wolves once were plentiful from central Mexico to the Arctic, but were killed off for decades, and by the 1930s had virtually disappeared from the American West," Abdollah writes. "In 1974, they were listed as endangered. Since then about $27 million has been spent by the federal government to conserve the wolves."

Since then, the gray wolf population has surpassed the goal of 300 and grown to more than 1,500, and the FWS said the population is expected grow by 24 percent annually. Last year, the wolves were de-listed in Wisconsin, and . That decision is being challenged in court, and environmental groups plan lawsuits against this decision as well. "Environmental groups were dismayed by the decision, calling it shortsighted and a political concession to ranching and hunting interests," Abdollah writes. (Read more)
Written by Tim Wiseman Posted at 2/22/2008 02:08:00 PM