Robert F. Kennedy Jr., a famous environmentalist from a famous family, has weighed in on mountaintop-removal strip mining for coal with a post on Google's "official blog." The post, titled "You are connected to mountaintop removal," comes a day before the "I Love Mountains" rally against the practice in Frankfort, Ky. (He wrote a similar item for The Huffington Post in November.) 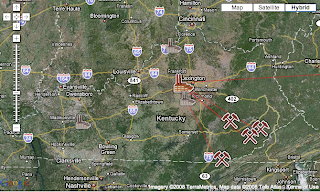 Kennedy guides readers to a Web site (in image) that uses Google technology and satellite photographs to pinpoint coal mines from above. "If the American people could see what I have seen from the air and ground during my many trips to the coalfields of Kentucky and West Virginia: leveled mountains, devastated communities, wrecked economies and ruined lives, there would be a revolution in this country," Kennedy writes. "Thanks to Google Earth, you can now visit coal country without ever having to leave your home."

The site is impressive, showing how coal mined in Appalachia is used to power faraway places, but the satellite images can be misleading; not all the disturbed areas (lighter areas amid the green of Appalachia's forests) are mountaintop-removal mines. Some are area mines that reclaim land to its approximate original contour, as generally required by the 1977 federal strip-mine law. Mountaintop- removal mines operate under a steep-slope exemption to that law.

Like many advocates arguing a cause, Kennedy exaggerates a bit. He says 2,500 tons of explosives are used each day to remove Appalachian mountaintops. That represents about half the explosives used by the entire U.S. coal industry each day, and while mountaintop removal does require large amounts of explosives, there are no data to confirm Kennedy's figure. He also gets off base as an amateur historian, claiming, "We are literally cutting down the historic landscapes where Daniel Boone and Davy Crockett roamed." Boone passed through the Cumberland Plateau on the Wilderness Road, but stuck to the valleys, not the mountains, and Crockett lived in an East county (Hawkins) and a region of the state (West Tennessee) that have no coal. And finally, contrary to Kennedy's plural usage, there is only one Appalachian coalfield (it's a continuous area, except around the edges, where coal seams have been lost to erosion). But we know his heart is in the right place. (Read more)