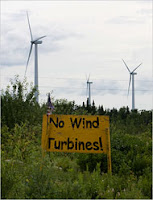 There's a boom in wind power in upstate New York, but the developers have brought not only controversy, but "an epidemic of corruption and intimidation, as they rush to acquire enough land to make the wind farms a reality," Nicholas Confessore reports for The New York Times, pegging his story to the gripes of Janet and Ken Tacy:
"Two Town Board members had signed private leases even as they negotiated with the companies to establish a zoning law to permit the towers. A third board member, the Tacys said, bragged about the commissions he would earn by selling concrete to build tower bases. And, the Tacys said, when they showed up at a Town Board meeting to complain, they were told to get lost." There are several other examples elsewhere. Attorney General Andrew Cuomo has taken over an investigation begun by a local prosecutor, who told Confessore, "It really is renewable energy gone wrong. ... It's a modern-day gold rush."
"Cuomo is investigating whether wind companies improperly influenced local officials to get permission to build wind towers, as well as whether different companies colluded to divide up territory and avoid bidding against one another for the same land," Confessore reports, describing apparent attempts at bribery.
Legalities aside, "Families and friendships have been riven by feuds over the lease options, which can be worth tens of thousands of dollars a year in towns where the median household income may hover around $30,000. Rumors circulate about neighbors who can suddenly afford new tractors or trucks. Opponents of the wind towers even say they have received threats; one local activist said that on two occasions, she had found her windshield bashed in." (Read more)
UPDATE, Aug. 19: Similiar tales are recounted by Helen O'Neill for The Associated Press, in a story cited by Bill Bishop of the Daily Yonder, who writes, "In the past week there have been a number of stories that have found the dark side of wind." He also cites a story from Richard Cockle of Newhouse News Service saying that living near a wind farm "can cause a variety of physical ailments."
Written by Al Cross Posted at 8/18/2008 08:39:00 AM

wind produced energy problems are nothing like the monster problems of ethanol with its subsidies and its effect on food costs. speaking of graft, look at the emergency communications system former senator alphonse damoto got a former gov to approve that costs huge millions and doesnt work