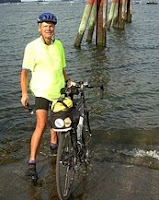 University of Kentucky law professor Bill Fortune, left, gained "a new appreciation for small-town America and its people" by riding a bicycle 4,100 miles with a small group from coast to coast this summer, Tom Eblen reports in the Lexington Herald-Leader. (Photo of Fortune at the Atlantic Ocean near Portland, Maine, by Bill Rund)

"What impressed Fortune most were the places he never would have stopped to see, and the people he never would have met, had he been driving through in a car," Eblen writes. "There was the couple in Waterville, Wash., who bought and renovated the abandoned Lutheran church where they had been married years before. Now it’s beautiful again, and the couple rents it as a wedding chapel. . . . Fortune now knows that Buffalo, Wyo., claims to have the world’s largest swimming pool, and Huron, S.D., the world’s largest statue of a pheasant." Fortune says, "You see the country in a different way when you’re on a bicycle. If you made the trip in a car, you couldn’t see it as slowly and intensely as we saw it."

"Fortune marveled at the vast openness of the West as he passed abandoned houses and towns depopulated by a changing economy," Eblen writes. "Many people had lived in their small towns all their lives, but their children had left in search of jobs and a more exciting lifestyle. He saw human despair on Indian reservations, and noted there was at least one bar in every Western town, no matter how small, and gambling machines in every bar and gas station."

Explorers often like to draw boundaries, and we tend to agree with our friend Bill on this one: "The cyclists agreed that the West ended and the Midwest began when they crossed the Missouri River in eastern South Dakota near the Minnesota line," Eblen writes. "Gradually, the empty country gave way to tidy farms and farmhouses and well-kept small towns." (Read more) For the blog version of Eblen's story, with a very nice, three-minute audio slide show from Fortune, click here.
Written by Al Cross Posted at 9/19/2008 04:29:00 PM