According to the American Farm Bureau Federation's 23rd annual Thanksgiving dinner cost survey, people will have to pay 6 percent more to get the feast on the table this year, mainly because turkey prices are up. The average cost of dinne for 10 is $44.61, an increase of $2.35 from last year. "The price of a 16-pound turkey is $19.09, or $1.19 per pound, which is an increase of 9 cents per pound compared to 2007," reports Lindsey Klingele of MeatingPlace. (Read more) 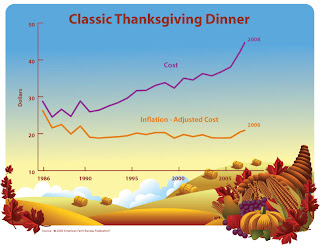 Contrary to the national parent and its findings, the Indiana Farm Bureau says a Thanksgiving dinner for Hoosiers will cost 4.3 percent less than last year: $45.58, down $2.05. "White potato prices are up 35 percent this fall because potato acres were down 8 percent from last year," Purdue agricultural economist Corrine Alexander told Dave Russell of Brownfield Network. "In contrast, sweet potato prices are down because of a record crop of sweet potatoes." IFB said in its release, "Neither the national nor Indiana surveys is scientific They are instead snapshots of prices on basic items during a given time period." (Read more)

The National Farmers Union reminds us that "off-farm costs including marketing, processing, wholesaling, distribution and retailing account for 80 cents of every food dollar spent in the United States." For details and examples from NFU, click here.
Written by AWM Posted at 11/25/2008 09:16:00 AM