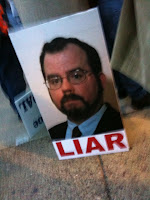 We've already reported about the atmosphere at the Army Corps of Engineers hearing in Charleston, W.Va., on Tuesday, but not all the pro-coal energy was directed at environmentalists. At least one participant chose to direct his anger at The Charleston Gazette reporter Ken Ward Jr. Ward, who work is frequently excerpted here, was shown on a sign, right, with the word "liar" printed under his picture.

The sign is getting some play around pro-coal blogs, and Ward has invited its creator to post a guest blog about his or her feelings on his blog, Coal Tattoo. Comments on Ward's blog post inviting the creator's contribution ranged from support for Ward to comparisons of his work with President Obama's controversial Nobel Peace Prize. UPDATE, Oct. 16: Someone started a blog called Gazette Tattoo Oct. 14, apparently in response to Ward's offer.

Since we often use Ward's work, it should go without saying that we feel he consistently produces some of the best work of any reporting on coal anywhere, from its environmental impacts to mine safety. While attacks against the news media are not uncommon, we commend Ward for his handling of the situation. Journalists around the country should take note. (Read more)
Written by Jon Hale Posted at 10/15/2009 11:59:00 AM