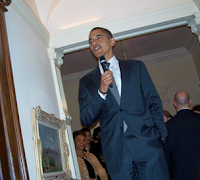 "You go into some of these small towns in Pennsylvania, and like a lot of small towns in the Midwest, the jobs have been gone for 25 years and nothing's replaced them. And they fell through the Clinton administration and the Bush administration, and each successive administration has said that somehow these communities are gonna regenerate, and they have not. And it's not surprising, then, that they get bitter, and they cling to guns or religion or antipathy toward people who aren't like them, or anti-immigrant sentiment or anti-trade sentiment as a way to explain their frustrations."

So said candidate Barack Obama at a fund-raiser in the San Francisco area in April 2008. We know that thanks to Mayhill Fowler, left, the citizen journalist who captured the remarks and took the photo, above, at the event. The words "will always be part of his public persona," she writes in her book Notes from a Clueless Journalist: Media, Bias and the Great Election of 2008. And when she reached that conclusion, she decided to write the self-published, electronic book.

The 280-page volume "is as quirky as Fowler's rambling posts for OffTheBus, the Web operation that got novices to write campaign dispatches that were posted on The Huffington Post," James Rainey writes in his Los Angeles Times media column.

Fowler, a native of rural West Tennessee, writes that she took Obama's remark as confirmation of "the mindset of the liberal, secular world in which I lived in Northern California. Since I had felt the anti-religious prejudice around me for 40 years, I was stricken by Obama's remark." Also, "I knew the anti-immigrant sentiment of some small-town Americans was in a fully human way much more complicated than Obama's sweeping description." In October, Obama called the remark "my biggest boneheaded move."

The book "reaches for a grand account of a historic presidential race," Rainey writes. "But it tells us more about Fowler -- a committed partisan coming to terms with being a journalist and a media rookie discovering the power and limits of her outsider status." (Read more) The book is available on lulu.com and Amazon.com for Kindle readers.

How Fowler milk's her perceived golden cow won't be high on my reading list....honestly, won't be on my reading list, especially since 30 years in Appalachia, for me, pre-validated those original remarks from Obama. Sometimes the truth, is, well, just the truth....

no need to publish this comment. But please fix your link to Rainey's column reviewing the Fowler book. Right now it's just a "mailto" link and I don't think that's what you intended.