Once upon a time there was a perfect bull . . . 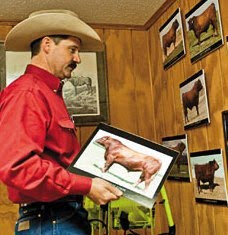 The bull was exceptional and becoming much sought-after for his semen, but "one warm October morning in 2007" he was "inert as a lump of clay. The bull could not get up. Donnell bent over to find that its right rear leg had been mangled, most likely in a fight with another bull, a battle for turf or just a boyish tussle for fun. Revelation was crippled, and a crippled bull is worthless. A crippled bull produces less and weaker sperm. A crippled bull is sent straight to the packinghouse."

Well, not right away. Not this bull. "Revelation was like Barbaro, the racehorse. If ever there was an animal worth going the extra mile for, it's Revelation." So Brown and his partners tried to save the animal, but ultimately failed, and he became steak and hamburger. Laskas tells Revelation's saga in detail from his care, his slaughter and his almost-cloning to the cowboys and communities involved along the way. Read the story.