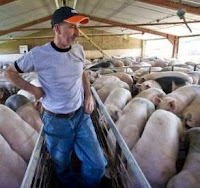 As consumers have enjoyed low meat prices in recent years, hog and cattle farmers have been struggling to turn a profit. Demand for meat is up this year, while the supply of hogs and cattle has fallen, leading to profitable forecasts for many producers for the first time since 2007, Mike Hughlett of the Minnesota Star Tribune reports. "The hog guys, the cattle guys -- they were really dealt a tough hand," Michael Swanson, an agricultural economist at Wells Fargo, told Hughlett. "Things are finally breaking their way." (Star Tribune photo by Glen Stubbe: Rick Grommersch checked one of the hog barns on his farm near Nicollet, Minn.)

Pork and beef exports fell in 2009 and the hog industry was further hurt by fears relating to the H1N1 flu. In 2009 "hog producers' production costs per pig were $135 on average, well above the average $105 per head they received in revenue," Hughlett writes. As demand has rebounded and supply has shrunk, hog farmers are making $165 per pig, compared with their $135 cost of production. Still some fear that when the higher price finally reaches the grocery store, consumers will back off their meat consumption. (Read more)

The rebound in livestock isn't confined to Minnesota. "After a two years of low prices, high feed costs and losses, the cattle business is enjoying a resurgence because of stronger demand as the economy improves," Dan Piller of the Des Moines Register reported earlier this month. Wholesale prices for most beef cuts are up by double-digits, Piller writes, and hamburger is up almost 20 percent. Retailers have warned that consumers will see the increase in beef prices as the summer goes on and demand grows. (Read more)

UPDATE, May 13: While high prices are good news for hog producers, they may be just another example of a boom-and-bust market, John Strak writes for MeatingPlace.com. (Registration and subscription may be required; subscription may be free)
Written by Jon Hale Posted at 5/11/2010 11:36:00 AM