A Southern Indiana rural electric cooperative has agreed to install state-of-the-art pollution control technology at its two coal-fired power plants as part of a settlement with the Justice Department and the Environmental Protection Agency. The settlement calls for Hoosier Energy Rural Electric Cooperative to pay a civil penalty of $950,000 and spend $5 million on environmental mitigation projects to address the impacts of past emissions, according to a press release. The settlement also requires Hoosier to reduce sulfur dioxide emissions by almost 20,000 tons per year and nitrogen oxide emissions by more than 1,800 tons at its Merom and Ratts plants.

Hoosier must direct $200,000 for projects to mitigate the harm caused by Hoosier's excess emissions at lands owned by the U.S. Forest Service. The remaining $4.8 million will be spent on one or more of the following projects: Tapping coal-bed methane to generate electricity and sending the resulting carbon dioxide to a greenhouse; sponsoring chaneouts and retrofits for wood-burning appliances; retrofitting public diesel engines with emission-control equipment; or installing solar power systems on public schools or facilities of non-profit groups. (Read more)

The co-op serves about 290,000 customers through 18 member cooperatives, one of them in southwestern Illinois. 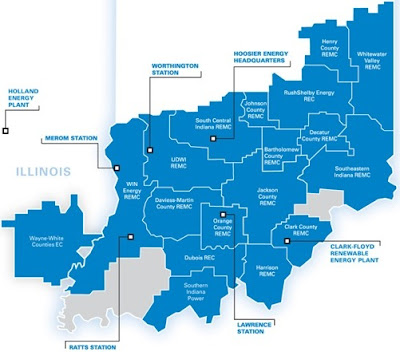