Reports of rural outmigration are nothing new, but new research suggests many of those former ruralites may not be moving to sprawling metropolises like Chicago or New York. Instead these migrants may be moving to urban areas withing predominately rural states like North Dakota, creating so-called "sponge cities," Debora Dragseth, a associate professor of business at Dickinson State University in North Dakota, writes in NewGeography. "North Dakota’s four largest cities, Fargo, Bismarck, Grand Forks and Minot, are growing in large part due to the young adults who for decades gone elsewhere to other regions," Dragseth writes. "In the process, rural North Dakota is facing a protracted population crisis as significant numbers of its small communities are on a slow slide to extinction." 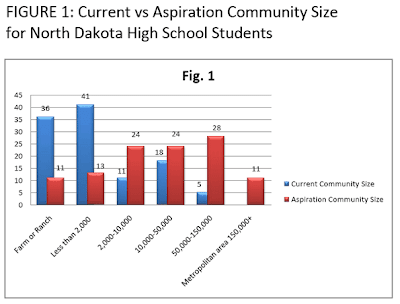 A survey of 111 North Dakota high school juniors last month revealed this growing trend. NewGeography chart). "Although roughly four in ten were raised in communities of fewer than 2,000 residents, out of more than 100 students surveyed, only six wished to live their adult lives in the a town of fewer than 2,000," Dragseth writes. The largest Great Plains cities, like Minneapolis, may not end up being the ultimate sponge cities, Dragseth writes: "Minneapolis has experienced a 1.4 percent drop in population since 2000. Demographers are beginning to observe that for many of us there is a point where diseconomy of size becomes real."

"A dozen young adults moving from Edgeley, N.D. (population 637), to Fargo is irrelevant to Fargo as it absorbs the new residents with barely a nod, but to Edgeley, the shift represents significant and chilling loss of young, skilled, educated workers that will have a detrimental impact on the town’s future prosperity or even survival," Dragseth writes. Mark Stephens, a young college graduate who left his small town of fewer than 400 for Fargo, explained, "The first thing people throw out as an excuse is increased opportunity, but let's face it, 18- to 20-something adults are not thinking long term. For the most part, kids in that age group are really pretty shallow. In truth, I think it comes down to one word: jealousy. They are walking down a gravel road in their tiny town with a link to massive amounts of media right in their back pockets. It's no different than when they were little kids—they see someone with ice cream and they want some too." (Read more)
Written by Jon Hale Posted at 7/06/2010 04:59:00 PM