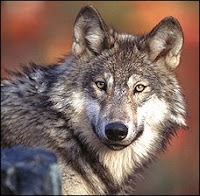 We most recently reported on the controversy surrounding the northern gray wolf's endangered-species status in November, when few Idaho hunters managed to kill wolves in the state's first wolf hunting season since a federal judge removed the endangered-species designation in Montana and Idaho. Last week another judge overturned the delisting, saying "Northern Rockies wolves must all be treated as a single population," Kari Lydersen reports for The Washington Post. Opponents of the listing, who say the wolves have grown too populous and pose a threat to livestock, pointed at Wyoming as the reason the controlled hunts in Montana and Idaho were unsuccessful. (U.S. Fish and Wildlife Service photo)

"Wyoming law allows the unregulated hunting of wolves throughout most of the state if they are taken off the endangered list," Lydersen writes. "So while the federal government delisted wolves in Montana and Idaho last year after those states agreed to management plans that included controlled wolf hunts, the U.S. Fish and Wildlife Service kept Wyoming wolves on the endangered list." Tom Strickland, assistant interior secretary for fish, wildlife and parks, explained, "Unfortunately, we're not in a position to reward [Montana and Idaho] for their responsible behavior, because Wyoming is the outlier." Montana and Idaho officials, legislators and ranching groups said they will seek to reverse the ruling by U.S. District Judge Donald Molloy. (Read more)

Local reaction to the decision in Montana centered on disapproval of Wyoming's role in the controversy. "In light of Judge Molloy’s decision, that means that Wyoming’s temper tantrum over wolves is directly impacting the way that we in Montana are able to manage our wildlife," Tim Aldrich, president of the Montana Wildlife Federation, told Eve Byron of the Helena Independent Record. "We don’t believe this is acceptable behavior coming from a neighbor, especially a neighboring state with an immensely appreciated wildlife resource of its own." (Read more)
Written by Jon Hale Posted at 8/09/2010 12:16:00 PM