County-level breakdowns of stimulus spending per person show rural counties received slightly more money than their urban counterpart, but the difference was too small to draw meaningful conclusions. "Are there patterns here? Frankly, there are no common factors that explain why some counties have gotten more stimulus spending than others," Roberto Gallardo and Bill Bishop report for the Daily Yonder. "Poor counties aren’t getting more per person than rich ones. Counties with high unemployment receive slightly less money than those with low unemployment." Gallardo and Bishop used ProPublica's database of stimulus spending for the analysis. 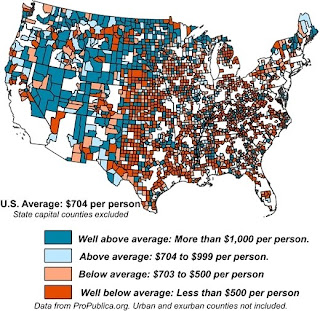