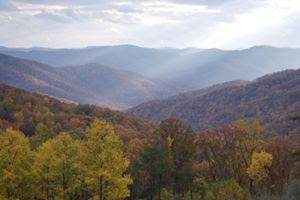 If granted by the federal government, a petition by Tennessee Gov. Phil Bredesen would make state-controlled sections of the scenic Cumberland Mountains northwest of Knoxville (state photo by Byron Jorjorian) off limits to surface coal mining.

"At issue is Northern Cumberland ridgeland that the state owns or holds easements on but that others own the mineral rights to," Anne Paine of The Tennessean reports. "The ridges and 600 feet on either side would be declared 'unsuitable for mining' under the request made to the federal Office of Surface Mining." The area in question lies on either side of Interstate 75 north of Knoxville, in the stretch where the northbound lanes first run southeast after running southwest along the top of Pine Mountain. (PDF map of the area)

"These lands are managed by the state of Tennessee for hunting, hiking, wildlife viewing and other outdoor recreational activities," Bredesen said in an announcement. "This petition asks the federal government to help us prevent mining on these ridgelines to protect their important cultural, recreational and scientific resources." Bredesen contends surface mining would be "inconsistent with uses specified in the Wildlife Management Area and Conservation Easement, including hunting and recreation, depriving future generations of these special resources."

Coal groups were quick to condemn the proposal, saying it was a violation of property rights. "The state could only afford that land because they only bought the property surface rights," Chuck Laine, president of the Tennessee Mining Association, told Paine. "They didn’t buy the mineral rights." Laine said his organization had not reviewed the entire petition yet, but the group is "strongly opposed to this." Coal could still be mined below the ridgelines, but Laine said that wasn't enough. "We’ve got coal up there," he said. "If you can’t mine it up there you can’t mine it." (Read more)

Bredesen leaves office at the end of the year, so the petition could become an issue in this year's race for governor between Democrat Mike McWherter, son of former Gov. Ned Ray McWherter, and Republican Bill Haslam, mayor of Knoxville, which lies between the Great Smoky Mountains (which have no coal) and the Cumberlands. Haslam generally opposes mountaintop-removal mining but has also said he doesn't want to discourage coal mining in Tennessee.
Written by Jon Hale Posted at 10/04/2010 03:19:00 PM