Where to count prisoners in redistricting?

Many rural areas have sought prisons as boons to economic development; they can also have the effect of increasing their neighbors' political clout, because most states count prisoners where they are confined, not their last permenent address. But that is changing, and now that almost all states and localities have data from the 2010 census, the debate over where to count inmates for redistricting has emerged as one of the key issues in the process. 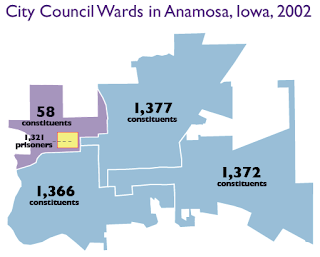 Here's an extreme example: In Anamosa, Iowa, one of the four city council wards, supposedly equal in population, had hardly any voters because it was the site of a correctional institution. (Prison Policy Initiative map)

In Somerset County, Md., Commissioner Craig Mathies won his race with just 307 of 542 votes while other districts produced at least 1,400 votes each. Maithes' district had a low vote total because more than 3,300 of his constituents are inmates of the Eastern Correctional Institution Complex who can't vote, Josh Goodman of Stateline.org reports. Soon that distortion in Somerset County will change, because Maryland was the first state to "require that, for the purposes of local, state legislative and congressional redistricting, prisoners must be counted at their last permanent address — not the place where they’re incarcerated," Goodman writes. Since Maryland passed its law, New York and Delaware have followed suit. In New York "the state Senate map drawn 10 years ago used prison counts to boost the representation of Upstate Republican counties, where a disproportionate number of state prisons are located."

Two states, Vermont and Maine, allow prisoners to vote, but both use the prisoners' permanent residence for voting purposes. Many people want that approach adopted elsewhere. "People in prison are being used in many ways as filler," Justin Levitt, a professor at Loyola Law School in Los Angeles, told Goodman. "The districts’ population is built on the backs of the ghost population."

However, simply counting prisoners where they came from isn't as easy as it might seem. "States lack consistent records for prisoners’ permanent home of record," Goodman writes. "The Census Bureau said this would mean that each prisoner would have to be contacted individually to make the change." (Read more) The Prison Policy Initative, which advocates counting inmates for redistricting purposes at their last permanent address, offers a primer on the issue for rural journalists. To download the PDF, click here.
Written by Jon Hale Posted at 3/21/2011 06:17:00 PM