Contrary to the Kentucky Republican's statement, the research means "Coal miners who are working in dust levels that are currently legal in this country are contracting and dying from serious lung diseases caused by their exposure to those legal levels of coal dust," Ward writes. Edward Petsonk, one of the study's authors, said at Wheeling Jesuit University's annual International Mining Health and Safety Symposium, "It’s still happening. There is a problem with miners’ health, and it is a current problem. This is no longer something that we can just sit on our hands about." (Read more)
National Institute of Occupational Safety and Health chart of black-lung incidence rates: 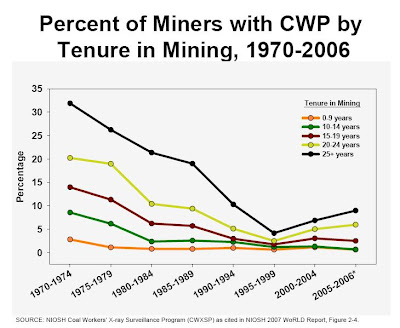 I think I also agree with you. Most of the time the lung cancer is increasing be the more usage of the smoking. And the black lung rates are increasing and are not decreasing.