Joel Achenbach, the author of Why Things Are & Why Things Aren't, is one of our best explanatory journalists, and he shows his stuff in The Washington Post today, describing what could be called a rural invasion of urban territory as the Mississippi River's record or near-record flood crest (depending on location)  moves south: 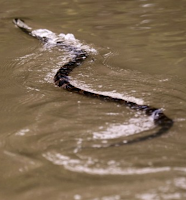 "The snakes are out. And the bears. The gators. The jumbo rodents known as nutria. The feral hogs. They seek higher ground as the floodwaters advance, and that can mean the top of a levee or in someone’s back yard. Herds of deer have clumped on tiny islands in an ancient swamp that is becoming a lake." (Associated Press photo by Gerald Herbert)

Achenbach's man-vs.-nature story is mainly about the U.S. Army Corps of Engineers' efforts to prevent breaches of vulnerable levees, and makes a point that shows his skill for explanation: "A flood exists in four dimensions, including time — because a long-duration flood can be more problematic than one that crests and recedes quickly." (Read more) In a blog item, Achenbach pays tribute to John McPee's The Control of Nature.
Written by Al Cross Posted at 5/22/2011 01:50:00 PM