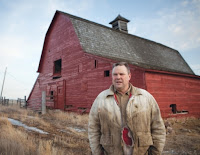 "Jon Tester, United States senator, is face down in the mud." So begins Andrew Romano for his really good Newsweek story about Tester, who does farm work most weekends as he faces a difficult re-election bid in Montana next year: one that could prove pivotal for the nation and say something about Democrats' relationship to rural America. (Newsweek photo by Aaron Huey)

"His rural constituency will help determine who controls Congress, and perhaps even the presidency, after 2012," Romano writes. "When Rep. Denny Rehberg, Montana’s best-known Republican, launched his own Senate bid in February, Tester’s chances for reelection plummeted. He’s only the tip of the rural iceberg. According to Charlie Cook, the Capitol Hill handicapper, nine Senate races now qualify as 'tossups.' Four will test the staying power of Democratic incumbents: Ben Nelson in Nebraska, Claire McCaskill in Missouri, Joe Manchin in West Virginia, and Tester. Three will take place in states where Democrats are retiring: Virginia, New Mexico, and North Dakota. And all seven of these contests will largely be decided by people more like Jon Tester than Chuck Schumer," the prominent, liberal senator from New York.

"The math is simple," Romano argues. "If Democrats can’t connect with small-town voters, they will lose the Senate next November—and make it difficult for President Obama, who held his own among rural Americans in 2008, to recapture states like North Carolina that put him over the top last time around." In Montana, Tester has trouble from both sides, because liberal Democrats are unhappy with his relatively conservative voting record.

"It’s clear that being a rural Democrat in the age of Obama is much trickier than just acting like one," Romano writes. "In other states, other rural Democrats are facing the same challenge as Tester, or will be soon: a new, wired landscape that lets them draw support from every corner of the country but holds them to a one-size-fits-all standard of urban liberalism in return. It’s Tip O’Neill’s famous axiom in reverse: now all politics is national." (Read more)
Written by Al Cross Posted at 5/21/2011 11:25:00 AM