The U.S. Postal Service, fighting to get Congress to let it stop delivering mail on Saturdays, is disputing an advisory opinion that questioned its cost-savings estimates and its lack of consideration for the effect that five-day delivery would have on rural areas. 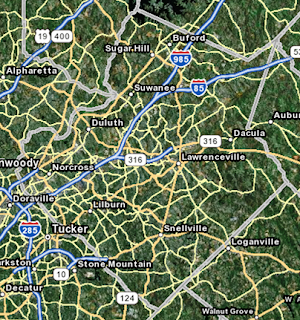 The Postal Regulatory Commission said in March that the Postal Service should not eliminate Saturday delivery without more study of the impact on rural customers. It said a USPS poll asking Americans if they would rather have Saturday mail or pay more for stamps used "an improbable 10 percent rate increase, which may have biased the responses," and that the "rural" people in the service's focus groups about the issue were in Gwinnett County, Georgia, above, in suburban Atlanta, and Snohomish County, Washington, below, in suburban Seattle. (MapQuest images; click on either map for larger version)

USPS said the groups had people from "rural areas surrounding Atlanta and Seattle and are served by rural carriers," and the commission didn't object to that methodology in its 2009 report to the commission about universal service. It said the commission's concern about "customers who might rely on rural carriers to conduct retail transactions along a delivery route in the absence of an accessible post office location on Saturdays ... was not a concern expressed by the rural participants in the market-research focus-group sessions."

That's no surprise, since these were residents of metropolitan areas, not truly rural regions where post offices are the least accessible, making retail transactions with mail carriers much more common than on rural routes near major cities. The exception to that might be lightly populated central and eastern Snohomish County, but what were the chances that someone from there was picked for the Seattle focus group and was willing to drive to the city for it? Yes, the undersigned has an opinion on this subject, having testified before the commission that five-day delivery would have a disproportionate impact on rural America. For a video of the testimony, made on behalf of the National Newspaper Association, click here. For a PDF of the written testimony submitted in advance, click here.
Written by Al Cross Posted at 6/13/2011 04:37:00 PM