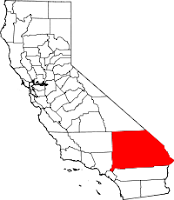 San Bernardino County, California (Wikipedia map), is the largest U.S. county in land area, 20,105 square miles, and it takes in very diverse territory, from dense suburbs of Los Angeles and Long Beach to the nearly empty high desert that stretches to the Nevada and Arizona borders. Now many residents in the high desert think their rural lifestyle is being threatened by a new law "that aims to reduce air pollution by encouraging higher density housing near transit centers, among other strategies to reduce reliance on the automobile," David Danelski of The Press-Enterprise in Riverside reports.

The law "seeks to reduce driving through what its proponents call 'sustainable' land-use planning for the next 20 years," Danelski writes. It law will "offer incentives for cities and counties that reduce sprawl and miles driven by approving higher density housing, such as apartment and condo complexes, near transit centers, places of employment and services," saccording to Hasan Ikhrata, executive director of the Southern California Association of Governments.

The law will be the topic of 16 public meetings, and Brad Mitzelfelt, a county supervisor, is urging residents to attend to defend their rural lifestyle. He said almost half of high-desert residents commute 40 or more miles to work, and "We cannot solve that problem in the high desert, and the air-quality issue that goes with it, by building condos above coffee shops next to bus stops." (Read more)
Written by Deloris Foxworth Posted at 7/13/2011 12:48:00 PM