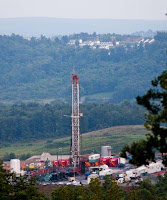 City officials in New Martinsville, W.Va,. are the latest in the Mountain State to reconsider a local ban on Marcellus Shale gas drilling in the city limits following criticism from the community and the industry. City officials said they were trying to protect the water supply, but many others believe the economic opportunities from drilling in the area outweigh its "public nuisance," The Associated Press reports. (AP photo)
Quinet's Court Restaurant has seen the economic growth first-hand, with business tripling over the past three years. "These gas people have brought new life to this town," Matt Quinet told AP. "Before, it was almost like a ghost town" following layoffs at local industries. The benefits don't stop there. "Besides creating jobs and tax revenue, gas companies donate to libraries, schools, 4-H clubs and other fundraisers they're asked to support," Quinet added.
The final council vote is set for Sept. 5. Mayor Lucille Blum told AP that statements from the West Virginia Independent Oil & Gas Association, which threatened to take members' business elsewhere, and Chesapeake Appalachia "were strong enough that they . . . made us look at that industry a different way." (Read more)
Written by Deloris Foxworth Posted at 8/10/2011 01:25:00 PM