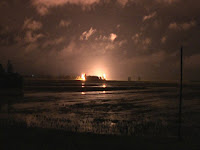 Missouri farmers lost millions last spring when the U.S. Army Corps of Engineers dynamited levees holding back the swollen Mississippi River to save many more millions in flood damage in more populated areas along the river. Though soybean crops have rebounded in the Birds Point-New Madrid Floodway, farmers are still angry and have filed lawsuits against the corps, and pressure from lawmakers has forced the corps to rebuild levees taller than it had planned. However, Paul Quinlan of Energy & Environment News reports a plan from ecologists about not rebuilding the levees at all has been largely ignored. (E&E photo: levee blows)

The plan calls for buying out landowners at high cost, but ecologists say taxpayer money would be saved long-term because flood-related property damage payments would be avoided. Ecologists say the levee system doesn't allow natural flood basins to absorb periodic floods. They also say removing levees would provide pollution control and wildlife habitat. The levee system makes the river more prone to frequent and intense flooding, they say. Quinlan reports calls to change management of the river have been ignored or met with hostility from Congress, which would have to pass legislation to open the floodway. (E&E News map of Birds Point-New Madrid Floodway)

Quinlan reports the Corps considers the levee, pump and reservoir system for the Mississippi River and its tributaries one of its greatest accomplishments. It was built after massive floods in 1927 took 256 lives and caused the modern equivalent of $5 billion in damage. Before floods last spring, the system had brought a 27 to 1 return on investment to taxpayers, according to the corps, and prevented an estimated $350 billion in damage. Critics such as Robert Criss, earth and planetary science professor at Washington University in St. Louis, say the benefit analysis ignores levee-building and channelizing, which is making flooding worse.

The corps predicted blowing the levees would cost $314 million in damages and prevent $1.47 billion in destruction elsewhere. Ecologists' proposed buy-out would cost about $582 million. The corps has chosen to rebuild levees to pre-demolition height for about $30 million. Quinlan reports the corps has failed to assign a dollar value to avoided flood costs and enhanced ecological benefits of not rebuilding levees and restoring floodplains. (Read more) For a New York Times story on Birds Point, click here.
Written by Ivy Brashear Posted at 1/13/2012 12:42:00 PM