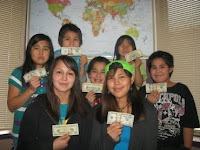 The Gusty Michael School in Stony River, Alaska, is facing closure because of low enrollment, but the school's seven students are fighting hard to save it. Alex DeMarban of the Alaska Dispatch reports the students have launched a Facebook page and are selling merchandise in a store they established in their 40-resident village to raise funds for a trip to Washington, D.C. They've requested a meeting with President Obama and hope he'll hear their concerns. (Photo from the school's Facebook)

"Schools are community centers in rural Alaska, and districts fight to keep them open because losing a school could mean losing a village if families and children move away," DeMarban writes. Schools in Alaska must have at least 10 students to receive state funding for operations, including maintenance and heat. The Kuspuk School District is considering picking up the school's operating costs if enrollment doesn't rise above 10. Students are planning to visit Alaska's congressional delegation to ask for support for their trip. They've made $7,000 so far for the $58,000 trip, and are asking the public for help. (Read more)
Written by Ivy Brashear Posted at 2/23/2012 01:50:00 PM