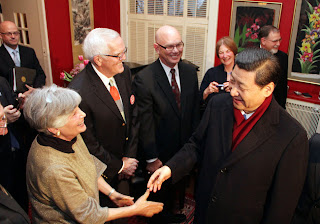 The people of Muscatine, Iowa, welcomed a friendly and familiar face back to town yesterday: Chinese Vice President Xi Jinping. He made a stop there in 1985 during an agriculture research trip before he became heir apparent to his country's highest office. He met the locals, spent the night with some of them, and when he returned to town, invited 17 of those people to tea, reports Kirk Johnson of The New York Times. (Times photo by Kevin E. Schmidt)

Chinese officials said the trip was a chance for Jinping to "relive a pleasant period from his past" and reconnect with farmers and other residents he met 25 years ago. The Times implies his visit was a propaganda event to show U.S. and Chinese audiences "the deep connection that the presumed future Chinese president ... feels with the people of the American heartland." The paper also implies the trip was possibly "meant to highlight China's growing dependency" on U.S. food. Iowa is one of China's biggest soybean suppliers.

Residents, though, didn't focus on the politics, Johnson reported. They were happy to have some good publicity for Muscatine and eager to extend open arms to an "old friend." Mayor DeWayne Hopkins said the city displayed its work ethic and value for friendship to Jinping. "If that message can be disseminated into the rest of the United States in encouragement for people to be interested in Muscatine and perhaps relocate here — and I mean people all the way from households up to retail and manufacturing — then that’s a plus," he said. (Read more) The Muscatine Journal reported some local reaction Jinping's visit.
Written by Ivy Brashear Posted at 2/16/2012 03:30:00 PM