The percentage of children living in poverty "increased dramatically" from 2000 to 2010, and remained highest in rural areas, but the largest increase was in cities between 10,000 and 50,000, Roberto Gallardo of the Southern Rural Development Center reports for the Daily Yonder. His analysis of U.S. Census Bureau data reveals that 21.6 percent of U.S. children lived in poverty in 2010, up from 16.2 in 2000, and that there was "considerable variation based on geography." ( map shows county-by-county child poverty rates; click to make larger) 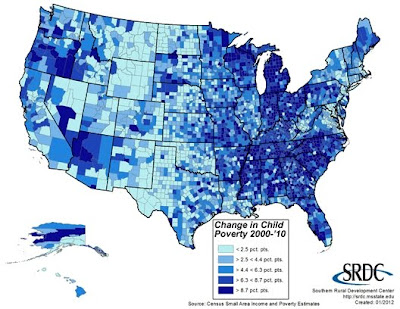 "The majority of counties in Michigan, through the mid-South to Florida and from Missouri to North Carolina experienced significant increases in their child poverty rates," Gallardo reports. The top 10 counties with the highest percentage increase of child poverty were in five states: Mississippi, Georgia, South Dakota, Alabama and Texas. Of those, five are in Mississippi, and five are rural.