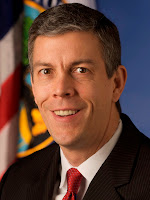 Publishing teachers' evaluations in newspapers is not a good use of performance data, U.S. Education Secretary Arne Duncan, right, said last week. Stephen Sawchuk of Education Week reports Duncan said printing the ratings is "a tremendous downside for teachers," especially at a time when morale is very low: "We need to be sort of strengthening teachers, and elevating and supporting them."

His comments follow those of others, including Bill Gates and Teach For America's Wendy Kopp, who say publishing the data "amounts to public shaming of teachers." Duncan said he supports "judicious disclosure of this data to school principals and to parents," and said any such data should take a comprehensive look at teacher performance, not merely be based on student test scores.

Sawchuk reports open-records laws in states are "exceptionally murky," putting  states "all over the place in whether they're even allowed to give parents (or others) access to teacher evaluations." An Education Week analysis found that only 18 states plus the District of Columbia would allow access to teacher evaluations, but are still unclear about exactly what data would be released. (Read more)
Written by Ivy Brashear Posted at 3/26/2012 11:07:00 AM