Reporting on records requests: One weekly shows how, another suggests competitor does it too much

Sunshine Week, which ends tomorrow, is designed to increase public awareness of the value of open government and efforts to keep it open. In Kentucky, at least one weekly newspaper made a special effort to spotlight the observance and its issues, noting inconsistency in what local government offices charged for copies of public records. Three counties to the east, another weekly made no mention of Sunshine Week, but created an unusual spectacle of raising questions about open-records requests made by the local, competing daily. 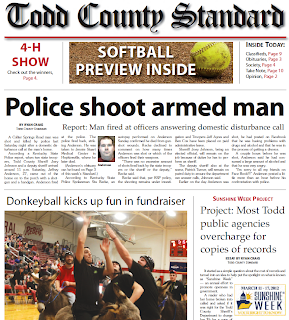 When a woman asked him if the sheriff could charge $5 for a five-page report, Editor-Publisher Ryan Craig of the Todd County Standard in Elkton surveyed his public agencies and reported, "Most of the public offices in Todd County are overcharging for public records." The sheriff''s proposed fee exceeded the allowable 10 cents per page by $4.50. Local police charge 25 cents a page. That's also the figure charged by court clerks. The courts have exempted themselves from the state Open Records Act, but media lawyer Jeremy Rogers told Craig that the fee may have prompted overcharging by agencies that are covered. Craig's story ended with a walk-through of how request records, and how to appeal to the state attorney general's office if a request is denied. The Standard is not online, but the pages with the story are here. 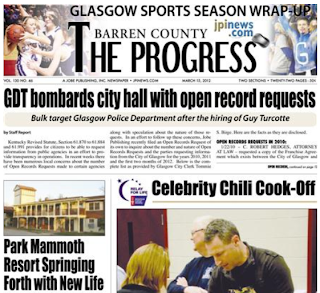 Publisher Jeff Jobe of the weekly Barren County Progress in Glasgow is in competition with the Glasgow Daily Times, as was evident from the top story in this week's edition. The subhead reported that the Times had targeted the city police department since the hiring of a new chief. Most of the front-page story, which also consumed most of an inside page, was a listing of the requests in 2010 and 2011, only one made by the Progress.

"In recent weeks there have been numerous local concerns about the number of open-records requests made to certain agencies, along with speculation about the nature of those requests," the story said, without saying who was concerned or what the speculation was. Jobe filled that vacuum in an editorial, saying the Times appears determined to prove its opinion that the Chief Guy Turcotte is not worthy of the office. "Perhaps someday the GDT will hit pay dirt and Turcotte will go down in flames, but I am certain that with each open-record request that does nothing more than cost the city time in preparing documents, their requests come closer and closer to being considered nothing more than a 'Witch Hunt'." The Progress is mainly behind a pay wall, but we have scanned and posted the editorial here.
Written by Al Cross Posted at 3/16/2012 04:30:00 PM