Rural health group in Ariz. one of 50 finalists for telemedicine grant; who's applied in your area? 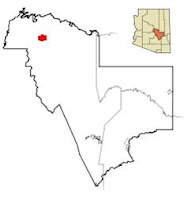 The Mongollon Health Association in Arizona is hoping to win a $25 million federal grant "to establish an integrated telemedicine system" in the small city of Payson (red in Wikipedia map of Gila County) that will provide digital medical records and real-time links between local doctors and specialists in metropolitan areas, reports Pete Aleshire of the Payson Roundup. The group hopes this will "compensate for the debilitating shortage of specialists in rural areas." MHA is one of 50 national finalists applying for the grant; who has applied in your area?

The MHA would create a telemedicine hub to serve "a wide expanse of northern Arizona," Aleshire reports. The grant would cover nine rural counties where poverty rates and the number uninsured people are high and average income is 20 percent behind the national average. One-third of households in the region make less than $25,000 a year. There are also high numbers of poor seniors and single mothers who face challenges getting health care. There are 300,000 medical helicopter transports a year from the area to urban hospitals, which costs $20,000 each. MHA concludes in the grant application that if 10 percent of those flights could be avoided, it would save $750 million annually.

The program would allow local doctors to consult with specialists in real-time with the patient present, preventing patients from getting "shuffled from specialist to specialist," Aleshire reports, reducing delays between referrals and diagnosis and repeated trips to urban centers. Insurance companies would also have to pay less to specialists who only advise a patient, but never meet them in their office. It would also allow specialists to consult with more patients in a day. (Read more)
Written by Ivy Brashear Posted at 3/07/2012 11:28:00 AM