Millions of Americans, many rural, now without bank accounts will have to adjust to direct benefit deposit 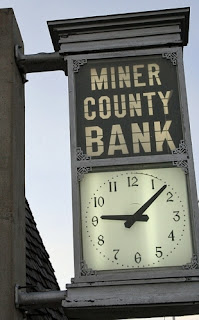 The federal government is ending paper benefits checks next year to save millions, but for "unbanked" people, or those without bank accounts, this will create issues because they can't receive payments by direct deposit. Gary Wollenhaupt writes for The Lane Report in Kentucky that the situation is "often more critical in rural areas that have fewer resources and fewer financial institutions than urban areas."

People without bank accounts rely on payday lenders and check-cashing stores that charge fees for money orders used to pay bills, and pay "exorbitant interest rates to borrow money to make it to the next paycheck," Wollenhaupt reports. Many low-income people who receive federal benefits will have to choose to directly deposit funds into a bank account or to put them on a pre-paid card similar to a debit card, but without a bank.

According to a Federal Deposit Insurance Corp. study, 7.7 percent of U.S. households, about 9 million, are unbanked. Those households include about 17 million adults. Another 17.9 million households with about 43 million people are are "underbanked," meaning they "may have an account but also use alternative financial services such as non-bank money orders or check cashing, payday loans, rent-to-own agreements and pawnshops," Wollenhaupt writes. The study also found that almost 20 percent of lower-income households don't have a bank account, and households with annual earnings less than $30,000 account for 71 percent of unbanked households. In total, close to 30 million households are either unbanked or underbanked.

Mississippi has the highest rate of unbanked households at 16.4 percent, and and Utah has the lowest rate at 1.7 percent. The eight states with the highest rates following Mississippi are Georgia, Kentucky, Texas, Alabama, New Mexico, South Carolina, Arkansas and Tennessee. The District of Columbia ties with Georgia's rate at 12.2 percent. The West and South overwhelmingly have the most states with high rates of unbanked households. (Read more)
Written by Ivy Brashear Posted at 4/04/2012 06:50:00 PM