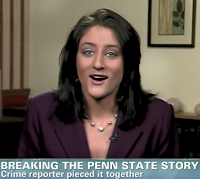 While Ganim's work has been widely recognized, little has been heard of another finalist in the category: Editor A.M. Sheehan of the weekly Advertiser Democrat of Norway, Me., and former Assistant Editor Matthew Hongoltz-Hetling, "for their tenacious exposure of disgraceful conditions in federally supported housing in a small rural community that, within hours, triggered a state investigation." For the paper's story about itself, click here. The other finalist was California Watch, founded by the Center for Investigative Reporting, "for its rigorous probe of deficient earthquake protection in the construction of public schools across the state."