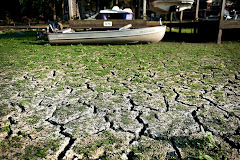 The drought ravaging crops from Indiana to Arkansas to California is taking its toll on rural economies and threatening to drive food prices to record levels, Bloomberg reporters Joshua Zumbrun and Mark Drajem write. (Photo of Morse Reservoir near Cicero, Ind., by Daniel Acker for Bloomberg)

Agriculture had been one of the most resilient industries in the past three years as the country struggled to recover from the recession; now it could be a drag. “It might be a $50 billion event for the economy as it blends into everything over the next four quarters,” said Michael Swanson, agricultural economist in the Minneapolis office of Wells Fargo & Co., the nation's largest commercial agriculture lender. “Instead of retreating from record highs, food prices will advance.”

The Department of Agriculture declared last week that more than 1,000 counties in 26 states are natural-disaster areas, the biggest such declaration ever, report Zumbrun and Drajem. This makes them eligible for low-interest loans. Corn prices rose Monday to the highest in 10 months, and soybeans increased to the costliest since 2008. Ernie Goss, a professor of economics at Creighton University in Omaha, said farm income, which has underpinned the growth of many rural states, will be under “significant downward pressure."

Next year, though, farmers are expected to boost equipment, seed and fertilizer purchases as they try to recoup in production what they lose this year, said Ann Duignan, analyst for JPMorgan & Co. This year’s lost crops will force some farmers to take out new loans to get through a poor season. “In those areas hit the hardest by drought, we will have to work with those farmers to do some additional financing because they’ll be missing the revenue they were expecting,” Well Fargo's Swanson said. “Farmers have always said to me $7 corn is no good if I have no corn,” Duignan added.
Written by Amy Wilson Posted at 7/16/2012 03:01:00 PM