This month's Rural Mainstreet Index from Creighton University in Omaha fell to its lowest level since September 2010, breaking a 10-month streak of being above growth-neutral, Marc Schober of Farmland Forecast reports. The RMI is now 47.9, down from 56.7, and persistent drought is believed to be the main culprit. The index comes from a survey of community bank presidents in rural areas of a 10-state region including from Missouri to Wyoming. it focuses on about 200 rural communities with an average population of 1,300. 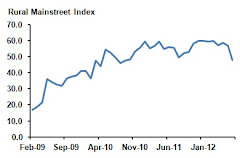 Creighton Economist Ernie Goss told Schober, "The drought is putting a dent into the economies of the agriculturally dependent areas of the 10-state area ... We are now detecting warning signals of a significant economic reversal for rural areas." Goss added that weaker economic conditions are slowing farmland-price growth, and that farmers are reducing the amount of equipment they are buying.

The farmland price index decreased slightly in June, but remained above growth-neutral. The farm equipment sales index decreased "significantly," Schober reports. It's down to 46.1 from 54.7 since June, its lowest level since 2009. Bankers weighed in on the impact on ethanol and biodiesel production and of those with plants in their areas, 64 percent reported negative impacts, 21 percent indicated plant closures and 42 percent reported operations cutbacks. To read the full RMI report for this month, click here.
Written by Ivy Brashear Posted at 7/31/2012 12:40:00 PM