Coal mining whistleblower gets his own folk song 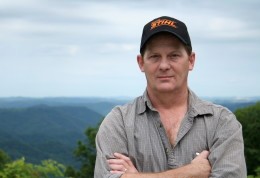 The legend of Kentucky's Charles Scott Howard grows. And like every great legend, the brave, truth-telling working man, coal miner and whistle-blower, well, he's got himself a rousing, Woody-Guthrie-style folk song. The song, "Big Coal Don't Like This Man At All," tells the story of how Howard became a committed safety activist by taking shocking video of his workplace conditions to U.S. government hearings. The song can be seen and heard on YouTube by clicking here.

Howard's courage as well as his subsequent injury on the job, post-grievance, and later firing were so remarkable as to make national news. This has meant more scrutiny, lawsuits and recriminations, all of which haven't made Howard the most popular man in eastern Kentucky. Add to that his health problems following what some consider the suspicious mine injury and Howard's attorney, Tony Oppegard, says that any message of support shown on the YouTube site would "mean a great deal to Scott as he continues on his road to recovery" and continues his battle for safe working conditions in America's coal mines. (Huffington Post photo by Dave Jamieson)

The tribute to Scott was written by Raymond Crooke. Here's a sampling of the lyrics, all of which can be found on the YouTube site:
"Mr Charles Scott Howard, he says what he feels.
They shouldn't be allowed to build old, crappy seals.
It's an awful shame them fellers had to be smothered to death;
For the safety of the miners, I'll fight till my last breath."

The link to a Huffington Post story on which the song is based is here. A follow-up on his reinstatement is here.
Written by Amy Wilson Posted at 8/02/2012 03:51:00 PM