Republican Mitt Romney is doing better among rural voters than John McCain did in his race with Democrat Barack Obama four years ago, according to a bipartiasn poll of rural voters in nine swing states.

Romney leads Obama by 14 points, 54 percent to 40 percent, in the poll for the National Rural Assembly, a network that promotes more effective rural policy. Four years ago in a poll of the same nine states, McCain got 50 percent and Obama 46.7 percent. "Rural counties are keeping Romney competitive in the states that are now up for grabs," Howard Berkes reports for NPR. "Romney appears to have the rural margin he needs to be competitive in battleground states. And Obama has failed, it seems, to hold on to enough of the rural voters who helped him become president."

The poll was commissioned by the Center for Rural Strategies, a nonpartisan organization, with money from the Carnegie Corp. of New York, and was conducted by Democrat Anna Greenberg of Greenberg Quinlan Rosner Research and Republican Glen Bolger of Public Opinion Strategies. It surveyed 600 likely voters in non-metropolitan counties in Colorado, Florida, Iowa, Nevada, New Hampshire, North Carolina, Ohio, Virginia and Wisconsin. Its error margin is plus or minus 4 percentage points. 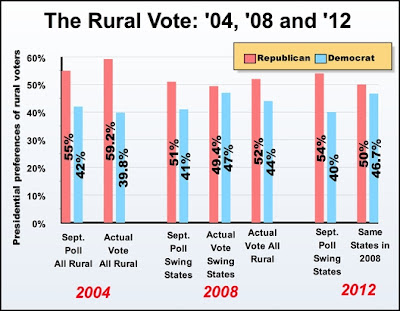 “The challenge for President [Obama] is just not to get beat too badly in the rural areas,” Bolger said. “This presages a very close election because, as well as Obama did in the rural areas in 2008, he's clearly not replicating that.” Democrat Greenberg said, “Rural areas in this country are very tough for President Obama. It was tough four years ago and they’re even tougher now. I think that that is obviously important in a very close presidential race because it’s really Mitt Romney’s geographic base.”

The poll found that half the respondents favored the Democratic position statement on immigration, while only 39 percent of respondents agreed with the Republican position. “These rural voters are not particularly exorcised about immigration issues,” said Dee Davis, president of the Center for Rural Strategies. “If you drill down you see they are conflicted. On one hand they want cops to be able to check immigrant papers, but at the same time they favor the DREAM Act promise of full citizenship for all kids who go to college or serve in the military.” For more details, click here.
Written by Al Cross Posted at 9/24/2012 09:14:00 AM