For the first time in decades, climate change wasn't mentioned in any of the three presidential debates, even though a recent Pew Research Center poll says that 42 percent of Americans now believe that global warming is "mostly caused by human activity," a sharp increase from five years ago. Now, Hurricane Sandy has thrust the issue into the election, though it has yet to be raised by the leading candidates. 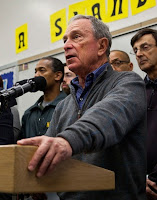 None of this discussion will help the Central Appalachian coal industry, no matter who wins, writes Ken Ward Jr. of The Charleston Gazette. Some coal enthusiasts say the defeat of Obama is the cure to the industry's ills, but industry experts and some of mining's biggest advocates agree: "Challenges facing the Appalachian coal industry are much broader and complicated than one election can solve," Ward reports.

Competition from cheap natural gas and other coal reserves in the West, the mining-out of the region's easiest-to-reach coal seams and added pressure to reduce carbon-dioxide emissions are adding up to reduce Appalachian coal's future viability, Ward notes. "Thinking that all of these things will simply go away if Gov. Romney wins is delusional and does a disservice to the industry and those who work in it," United Mine Workers spokesperson Phil Smith told him. The UMW, which endorsed Obama in 2008, did not this time, apparently following strong anti-Obama sentiment among miners.

The union sees a number of challenges for miners that aren't a part of the "war on coal" talking points: "threats to healthcare benefits for retired miner, hurdles for workers seeking to unionize, and continued health and safety problems," Ward reports. And politicians aren't talking about those, or other Appalachian coalfield problems. The region's coal production will continue, he writes, but for many communities, the projected decline in production "is significant and could have serious economic impacts," and no one wants to talk about how to address them. (Read more)
Written by Ivy Brashear Posted at 11/05/2012 02:04:00 PM