"Cutting firewood on a recent afternoon in the woods at the back of our farm, it occurred to me that the term conservative has lost all connection to its original meaning," Washington County, Kentucky, farmer and poet Maurice Manning writes in The New York Times. Manning, who teaches at Transylvania University in Lexington, discusses the various ways that he can be described as a conservative, and argues that many leaders in the Republican Party, which touts conservatism as its own, do not fit into the true definition of the word: to keep and preserve. (Wikipedia map) 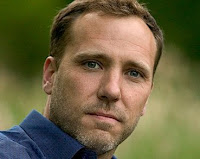 "It's interesting that the origin is a verb and not a noun, a term that implies action and duty, rather than merely a stance," Manning writes. He notes that he qualifies as a conservative because his goal on the 20- acre farm he owns is to "preserve the character and health of this land." He doesn't use chemicals, he plants gardens on a "few patches of level ground" and rebuilds the soil with compost and leaves in the fall. He says he learned ethics of hard work and preservation of the land from his grandfather. He learned rainwater-catching techniques that helped him through this summer's drought from his great-grandparents and great-great aunt.

But this version of conservatism that he and his neighbors share "runs counter to the model presented by the Republican establishment," he writes. The Bush administration "got us enmeshed in two wars . . . both of which have cost us blood and treasure . . . that cannot be calculated," and he says a few people who call themselves conservative have profited from them. He says it's obvious that the U.S. economic troubles come from Wall Street bankers and not the government. But "'conservative' leaders think we should do away with oversight and regulation and give the financial world absolutely free rein," he writes. He also takes a look at the conservatives in Kentucky who advocate for mountaintop removal coal mining, and laments how this is not a conservative way of thinking. "That kind of extravagance has not been good for our country or anywhere else," he writes. "It places making money ahead of making sense." (Read more)
Written by Ivy Brashear Posted at 11/07/2012 01:12:00 PM