In Montana, a surface-mine expansion permit is giving cattle ranchers a lot to complain about 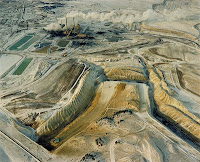 Coal is in a slump because utilities are switching to cheaper natural gas, but in Montana, where a quarter of the country's recoverable coal still lies unmined, the operators of the 25,000-acre Rosebud surface mine (right) are asking permission to add another 6,800 acres. And while the mine provides electricity to parts of Montana, Oregon and Washington, High Country News blogger Heather Hansen explains that owner Westmoreland Coal Co. is talking about exporting coal abroad for next 20 years because there are 120 billion tons of coal left in the mine and a huge market to exploit. But local cattle ranchers are getting touchy about their big neighbor, Hansen writes.

Those who have lived off the surface resources in the area "fret over what will become of their livelihoods in the shadow of the mines," Hansen reports. "The area's streams are important to them for watering their cattle, and they use the shallow underground aquifers to irrigate their hay. The ranchers have a problem, in particular, with how much water is being used by the coal operations, and the quality of water that’s left over."

And there's another problem, or two. One, ranchers don't trust the Montana Department of Environmental Quality, which they think has a less-than-perfect record for protection of their assets. And listen to rancher Clint McRae, whose family has raised cattle for 130 years on nearby land: “I am expected to sacrifice our operation so a for-profit company can take my land to haul coal to China. I'll fight that tooth-and-nail." The ranchers have lawyered up. The public comment period on the proposed mine expansion ends Monday, Nov. 5. (Read more)
Written by Amy Wilson Posted at 11/02/2012 09:21:00 PM