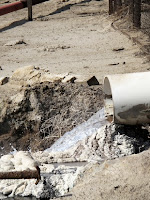 In most areas of the U.S. oil companies inject wastewater far underground where it can't harm humans or the environment. But a loophole exists in Western states, where arid conditions prevent livestock from getting enough water. If oil companies can prove to the Environmental Protection Agency that wastewater is used by ranchers or wildlife, they are free to dump it. This mostly doesn't create problems for Western states, which get to regulate oil companies' wastewater. But on Indian reservations, widespread dumping of oil waste occurs, Elizabeth Shogren of NPR reports. (NPR photo: Wastewater leaves solid deposits that can cause hazardous fumes)

The loophole was created in the 1970s, when the EPA was banning oil companies from dumping wastewater. Ranchers complained their livestock needed it to drink, and still dismiss concerns about its safety. And even though states can regulate wastewater, regulation on Indian reservations is done by the EPA on a case-by-case basis. Oil and gas companies dump freely on the Wind River Reservation in Wyoming, "so much that is creates streams that flow into natural creeks and rivers," Shogren reports. Wastewater often contains toxic chemicals, including carcinogens and radioactive material.

Through a review of EPA documents and emails obtained through a Freedom of Information Act request, Shogren found that some EPA staffers "clearly are appalled by wastewater releases," with one even saying that it could have "irrevocable human health and environmental impacts." The documents "suggest that as least some people inside the EPA are advocating for stricter rules," Shogren writes. "But much of this debate has been kept secret."

Tribal leader Wes Martel told Shogren, "You've got to wonder, what types of chemicals are those beef retaining? And when that goes to the slaughterhouse, what's in your steak?" Eastern Shoshone Tribe member Darwin Griebel, "one of a handful of ranchers whose livestock use the oil field water, pooh-poohs Martel's concerns," Shogren reports, quoting him: "Animals drink it. People aren't going to drink it. Hell with the quality of the water." (Read more)
Written by Ivy Brashear Posted at 11/20/2012 01:35:00 PM