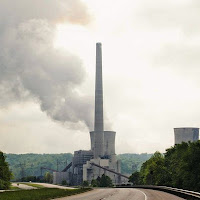 Kentucky Power Co. announced today that it will effectively close its Big Sandy Power Plant in Louisa, Ky., after scratching plans to install a $1 billion scrubber to comply with environmental standards, reports Ralph Davis of the Floyd County Times in Prestonsburg. The power produced by the plant will be replaced by a sister plant in Moundsville, W.Va. If this plan is approved, it will increase electric rates by 8 percent. The closure of a similar plant almost anywhere else in the U.S. would be expected. But in the heart of Central Appalachian coal country, the move speaks volumes. (Photo by Shawn Poynter)

Under a federal-court consent decree, the company must bring the Big Sandy plant into compliance with the Clean Air Act, or close it, by 2015 . If the company had installed the scrubber, electric bills would have increased by 31 percent, Davis notes. As the Kentucky Public Service Commission was deciding whether to approve that plan, Kentucky Power withdrew it, saying it wanted to "reevaluate alternatives due to changes in the energy market," Davis writes. Under the new plan, Kentucky Power would obtain 50 percent of the Mitchell Generation Station in Moundsville, which like it is owned by American Electric Power.

Kentucky Power's announcement doesn't address what will happen to the Big Sandy plant, but a separate statement released by the company says it is still trying to decide the plant's fate. The company said plans could come next year when it submits a filing to cover future generating capacity at Big Sandy, Davis writes. Some options for the plant include converting it to natural gas, which could be used for generation at times of peak demand. Regardless, the generator will "cease burning coal, as plans to retire it as a coal-fired generator in 2015 are already in place," Davis writes.

Employees at the plant will have an opportunity to get other jobs in the AEP system, and those who aren't hired elsewhere will be offered severance packages. "The closure will also have a negative ripple effect in the coal industry," Davis writes. The Big Sandy plant consumes about 2 million tons of coal a year, but after 2015, it will consume no coal, perhaps putting some coal jobs in the region in jeopardy. (Read more)
Written by Ivy Brashear Posted at 12/19/2012 12:15:00 PM