Almost every major city in the U.S. harbors a population with a different worldview than nearby rural places, a trend that has increasinly defines our politics. "The difference is no longer about where people live, it's about how people live: in spread-out, open, low-density privacy; or, amid rough-and-tumble, in-your-face population density and diverse communities that enforce a lower-common denominator of tolerance among inhabitants," Josh Kron writes for The Atlantic.

Voting data suggest that "people don't make cities liberal -- cities make people liberal," Kron writes. The only major cities of 100,000 or more people that went Republican in this year's election were Phoenix, Oklahoma City, Fort Worth and Salt Lake City, followed by Wichita, Lincoln, Neb., and Boise, which almost went red, but were barely Democratic. "The gap is so stark that some of America's bluest cities are located in its reddest states," Kron writes. All of Texas' cities went for President Obama, as did major cities in Georgia, Indiana, Louisiana, Alabama, Arizona, Arkansas and South Carolina. (Princeton University cartogram uses height to reflect population and color shading to show degree of presidential preference) 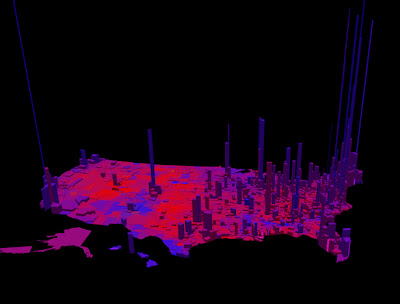 These red-state blue cities can have a big impact on elections. "Because winning a state's electoral votes requires only a simple majority, a single city can change the entire game," Kron reports. The population is so large in major cities that sometimes otherwise very red states are tipped blue because rural areas have far less population density than cities.

The divide between "blue city and red countryside" has been growing for decades. Since 1984, the number of "blue cities" has increased steadily, reaching a record this year when 27 of the country's 30 most populous cities voted Democratic. County-by-county maps reveal how voting has played out within the last 20 years. The coasts, industrial Midwest, Mississippi River and New South cities "have fortified the base of Democratic support," Kron writes. Republican support most consistently comes from the Mountain West, prairie states and the Bible Belt. (Read more)
Written by Ivy Brashear Posted at 12/03/2012 01:53:00 PM