High hay prices make it more attractive to thieves; Okla. sheriff fights back with GPS unit in a bale 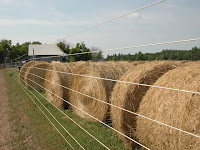 Severe drought has decreased hay production, increasing hay's price. Farmers were forced to buy it to feed livestock this summer as the price of feed corn skyrocketed. Now higher prices have led to an increase in hay theft, from Maine to California.

National Hay Association director Donald Kieffer told Russ Quinn of DTN Progressive Farmer that high hay prices, as much as $300 per ton, is the main reason for the rise in thefts. "Rural criminals who live in these areas know the value of the hay and a stack of hay sitting in a remote field in the middle of night is extremely appealing to a thief," Keiffer told Quinn. No one would think of stealing hay to resell in the past, he added. (DTN photo)

In Tillman County, Oklahoma, Sheriff Bobby Whittington is using technology to fight hay thieves. He bought a portable global-positioning-system unit, and put it in a bale on a farm where hay had been stolen earlier this year. Four weeks later, a message was sent to his cell phone in the middle of the night telling him the bale had been taken. He followed the trail with the help of real-time computer tracking, and found the thieves as they were unloading their haul. He arrested them back at the farm where they stole the hay as they were loading another bale. They face felony charges of concealing stolen property, which carries a possible sentence of three to five years in jail.