When the New York State Legislature passed a bill last year "that will eventually require ales and lagers labeled 'New York Beer' to contain 90 percent locally grown ingredients," the lawmakers apparently forgot that barley can't be used for brewing until it is malted, so a couple in Batavia are starting a malting house, the only one in the state, as well as growing barley, Howard Owens reports for The Batavian. 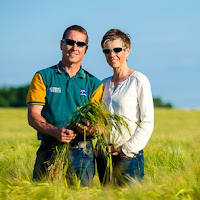 "Ted and Patricia Hawley . . . are sure others are coming, with anticipation of a craft brew boom in the state thanks to the new rules," Owens writes. "The farm beer license created by the bill is modeled after the winery license, which requires local ingredients and allows for tastings, on-site sales, bigger production runs and statewide distribution."

"This craft brewing industry is phenomenal," Ted Hawley told Owens. "There's no rules. I mean, there could be up to 30 ingredients in brews, from nuts and berries to honey, to apples. There's no rules and there are some great craft brews that are being processed right now in people's garages. This farm brewing bill will offer them an opportunity to open up larger and sell their brews." (Read more)