In about two months, states and the federal government will open online marketplaces for health insurance, which will also offer subsidies based on income – and the opportunity for the poor to enroll in the Medicaid program in states that have expanded it above the poverty level. By March 31, almost all Americans will be required to have health insurance or pay a penalty.

These steps will implement the health-reform law that Congress passed in 2010 and that even the White House calls Obamacare. It will be one of the most complex and challenging changes in American society since World War II, and newspapers are starting to help their readers get ready for it. 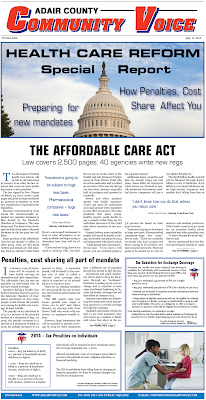 But such reporting is not, and should not be, solely the province of metropolitan newspapers. Last week the Adair County Community Voice in Columbia, Ky., published a 10-page special section on health-care reform. The front page had an overall story on the Patient Protection and Affordable Care Act, based on information gathered at a Kentucky Chamber of Commerce informational meeting, and a sidebar on the penalties and subsidies, with a box on each. Inside were several other stories, mainly from Kentucky Health News, and lots of ads from health-care providers.

The really special thing about the special section was that Editor and Publisher Sharon Burton sent the edition containing it to every household in Adair County, using the postal regulation that allows newspapers to send 10 percent of their annual circulation to non-subscribers at subscriber rates. The Institute for Rural Journalism and Community Issues has long urged local newspapers to do this with their health sections, because there is a big overlap among people who most need such information and people who do not subscribe to their local newspaper. Newspapers can sell enough ads to cover the extra printing and postage costs, or even sell a sponsorship for the additional circulation.

"Information about health care reform has come in bits and pieces and most of us probably really don't understand it with any depth," Burton told us in an email. "I jumped at the opportunity to attend the Kentucky Chamber of Commerce Health Care Reform Summit because the agenda looked excellent and it has been difficult to get a good overview of how health care reform will impact our local businesses and individuals. We originally planned a total-market issue in June but had to delay it until July. We decided to delay the health care reform section as well so that it could go to everyone. We've had numerous compliments from readers who had said it was the best compilation of information they have seen in one place."

To download the Community Voice's health-care reform section, as a PDF of approximately 10 MB, click here.The section is business-oriented, because Burton got much of her information at a Chamber of Commerce seminar. Broader sources include www.HealthCare.gov, the main federal site on the topic; the Kaiser Family Foundation, at www.kff.org; and the state agencies running the insurance exchanges. One good thrice-weekly publisher, Willie Sawyers of The Sentinel-Echo in London, Ky., reports good results from a special health section of 11 half-page units and alternate covers, prepared by Green Shoot Media, which specializes in special sections.
Written by Al Cross Posted at 7/29/2013 02:42:00 PM